Well that was dramatic. Yesterday morning saw some of the loudest thunderstorms I have ever experienced, and they dropped a massive amount of rain here at the club as well as the surrounding areas. The Upper West did not seem to jump as much as the lower (as Oquaga creek likely didn’t take the brunt of the storm), but while Hale was at ~600 cfs, we were at an easy 2,500 cfs in Home pool for the majority of the day. Heck, the creek coming out of  our pond was likely flowing more than the DEP is releasing – enough so that Winterdale Road was flooded in spots, directly outside the club for example. As of this morning, the West is clearing rather nicely, and will likely fish well tomorrow for dries, with today being a pretty good day to throw some streamers to the browns getting ready for the spawn. The East is still raging, and definitely not dropping as fast nor clearing as well as the West, so likely it and the Main Stem will take a few more days to get back down to a ‘reasonable’ level. I guess too many of us were doing a rain dance simultaneously. 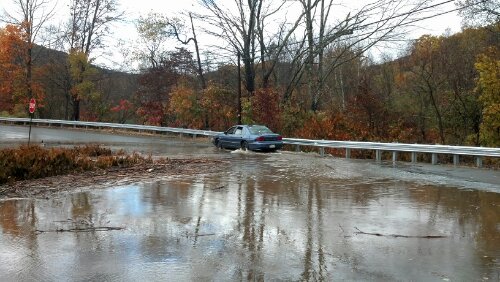 Winterdale Road in between the Club’s two driveways. Please don’t drive through this stuff when this happens – you never know if the road is washed out underneath. Photo: Bart Larmouth